How Much Does an Average Pumpkin Weigh?

From pumpkin pie to decorations, this particular member of the produce family is versatile in its use and a sure sign that Autumn has arrived. However, a pumpkin’s size can vary almost as much as … 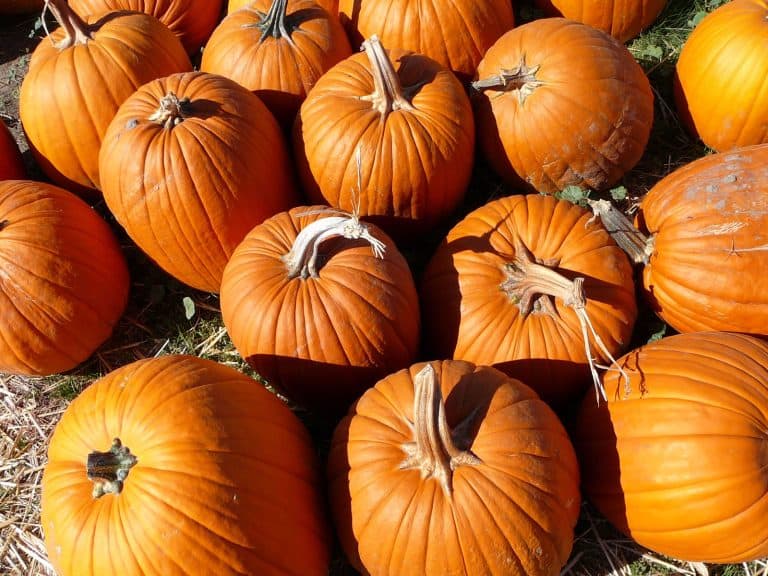 From pumpkin pie to decorations, this particular member of the produce family is versatile in its use and a sure sign that Autumn has arrived.

However, a pumpkin’s size can vary almost as much as its use. You might start to wonder, what’s the average weight of a pumpkin?

The average weight of a pumpkin depends on its variety. Most pumpkins will weigh between 1 kg (2.2 lbs) and 7 kg (15.4 lbs). However, each specific type of pumpkin will have its own size and weight range. This measurement is often affected by the specific reason for which a pumpkin variety is grown.

In this article, I’ll discuss the average weight of different types of pumpkins, including what can affect their size and what the weight and size spectrum for pumpkins actually is.

If you find yourself in a store looking for a pumpkin for your recipe and want to guess how much it weighs, this handy guide will also help. Keep in mind that once the skin and seeds are removed, a pumpkin will weigh less.

Since pumpkins can vary widely in size, you might wonder what the current extremes of the spectrum are as far as weight is concerned.

Furthermore, you might wonder if all pumpkins have the potential to grow to the same size. Perhaps if you give a typical pumpkin you’d eat enough time, it would grow to be the size of a giant pumpkin.

Unfortunately, that’s not the case.

Most of the commonly used types of pumpkins for eating and carving can all be classified as either “small” or “medium”. Once you start looking at large or giant pumpkins, then the purpose for them starts to become strictly decorative.

Let’s look at each of these sizes in more detail.

However, pumpkins that weigh up to 10 lbs (4.5 kg) will still be considered small, in general (source: GFL Outdoors).

This is also the case for pumpkins that weigh between 2 and 5 lbs (between 1 and 2.3 kg). Pumpkins this size are too large to be considered “mini” but are on the smaller side for the average “small” pumpkin.

For a size comparison, pumpkins that are roughly between the size of a pomegranate and the size of a basketball can be considered small. These are the pumpkins typically grown for food, as they are the right size to maintain a good flavor and be fully consumed before they go bad.

Here is an easy-to-read table for some average sizes of different types of small pumpkins (sources: Grow Gardener and David’s Giant Vegetables).

Average Weight of a Medium Pumpkin

However, pumpkins that weigh between 10 lbs (4.5 kg) and 15 lbs (6.8 kg) can also be considered “small” medium-sized pumpkins. These pumpkins are too large to fit into the small-sized pumpkin category. Their diameter will then be a bit less, usually averaging around 16 inches (40 cm).

For a size comparison, pumpkins between the size of a dodgeball and a large beach ball are usually considered medium-sized.

These are usually decorative pumpkins that are the first choice for jack-o-lanterns. In fact, the Jack O’ Lantern variety falls into this category, even though its average size is 18 lbs (8.16 kg).

These types of pumpkins don’t tend to taste very good in general, so they’re not typically used in recipes. However, animals will still eat these pumpkins and they’re often given as treats to deer and livestock.

Here’s a chart of the average sizes of some medium-sized pumpkins by type.

Average Weight of a Large Pumpkin

The diameter of large pumpkins can have an impressive range between 33 inches (85 cm) and 60 inches (150 cm). That means that, as a size comparison, a pumpkin between the size of a bowling bag and the size of a child’s carriage can be considered large.

These pumpkins are primarily used for decoration, though they’re usually left alone and aren’t carved due to their impressive size. These pumpkins are, however, too large to be eaten as they don’t have the typical sweet taste associated with pumpkins, and they tend to have a tougher pulp.

Here is a chart of the average weight of some large-sized pumpkins.

How Much Does An Average Giant Pumpkin Weigh?

On average, giant pumpkins typically weigh around 100 lbs (45.4kg) but can weigh even more than that. These pumpkins are grown primarily for their size. They are used as decoration and are often entered into contests.

That means figuring out an average diameter is difficult. Essentially, giant pumpkins can be anywhere from the size of a wheelbarrow all the way to being the size of a small car!

Pumpkins can be light enough that they barely weigh anything at all, or they can weigh thousands of pounds.

However, each type of pumpkin will have an average weight range, with most pumpkin varieties weighing in at well under 100 lbs (45.4 kg).

Is It Safe To Drink or Eat Tea Leaves? Risks and Benefits

Can You Smoke Chamomile? Is It Safe?