What Chemicals are in Plant-Based Meat and Burgers? 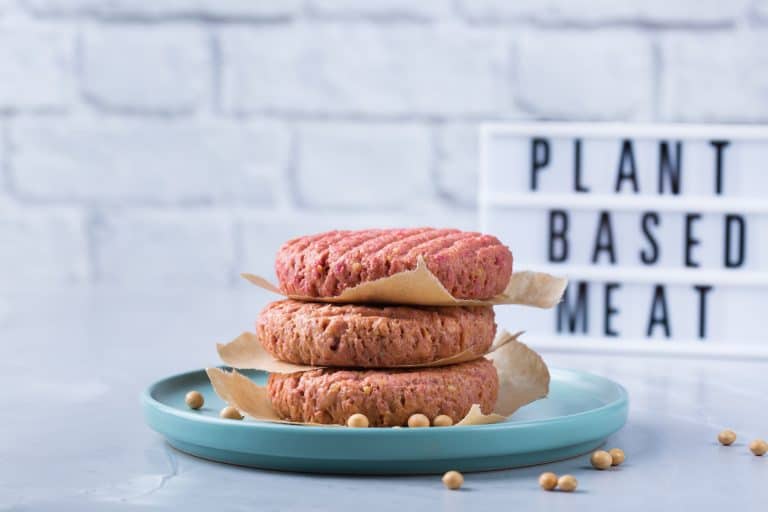 Many people are skeptical about veganism because they’re worried about the potential chemicals in plant-based meat and burgers.

Plant-based meat and burgers have more added ingredients than real meat – since they’re intended to taste and feel as close to meat as possible. So, many assume this means there are chemicals in the ingredients.

We’ll guide you through what you need to know about potential chemicals in plant-based meat and burgers.

What’s In Plant-Based Meat and Burgers?

There’s usually only one ingredient in meat: meat. Plant-based meats and much more complicated since they’re trying to replicate the taste and texture of meat without containing any animal products. As a result, some people find themselves hesitant to try these products in case they contain harmful compounds or chemicals.

There are dozens of meat-free meats and burgers on the market now, each with vastly different ingredients. However: the following ingredients are common in plant-based meat and burgers such as the Impossible Burger, Beyond Burger, and Quorn:

Ingredients such as calcium chloride or potassium chloride are considered chemicals, but you do not need to fret. These are very common ingredients. We’ll walk through some of the common plant-based meat ingredients and chemicals consumers may be worried about or unsure of what they even are.

People see the word laxative associated with methylcellulose and freak out. However, having a plant-based burger should not have a laxative effect. It’s derived from cellulose, which comes from plants.

In food, methylcellulose is used to stabilize and emulsify foods. All this means is it helps to bind the ingredients together, so they do not separate (source: Science Direct). Methylcellulose is FDA approved (source: FDA).

As the name suggests, potassium chloride is a type of salt composed of potassium and chloride. It is a naturally occurring substance (source: PubChem). This ingredient is considered safe in food and is often used to enhance flavor (source: FDA).

Lecithin can act as an emulsifier in foods. You may have already heard of soy lecithin, which is a similar substance (source: European Journal of Clinical Nutrition). Sunflower lecithin comes from gum extracted from dehydrated sunflower seeds.

Calcium acetate is added to foods as a stabilizer or firming agent. Stabilizers simply keep the structure of the food intact. It can also be used as a buffering agent; this means it helps stabilize the product’s pH level. It is considered safe for consumption (source: FDA).

Although it is a naturally occurring compound, it is often manufactured (source: EPA).

Barely malt extract is typically used as a sweetener in food derived from malted barley. Many people would consider this a natural sweetener, but remember, there was some processing to get the barley in this form.

Be wary of this ingredient if you are coeliac. This ingredient does not cause discomfort in trace amounts, so products with barley malt extract are sometimes considered gluten-free but may if a large amount of the food is eaten (source: Coeliac.org).

Calcium chloride typically acts to thicken, firm, and stabilize food. It can also be used to control the pH, enhance the flavor, or as an anticaking compound in food. It is generally considered safe (source: FDA). It is often a natural by-product of brine but can also be made from limestone and hydrochloric acid (source: Science Direct).

While many meat alternatives are more carb-heavy (especially compared to real meat), Mycoprotein is a decent source of protein while being low in sugar and fat (source: Current Developments In Nutrition).

Yeast extract typically acts as a flavor enhancer. This compound is made from a concentration of the soluble parts of yeast, which have been broken down by enzymes (source: ACS Food, Science & Technology). Yeast extract is generally considered safe for consumption (source: FDA).

While there is naturally occurring protein in peas, pea protein isolate is a type of protein chemically removed from peas and used to add more protein to plant-based meats and burgers. Pea protein is a complete protein, meaning it contains all nine essential amino acids (source: Nahrung).

It may even help lower blood pressure (source: ACS Publications).

Many people assume a vegan diet is healthier by default. With so much vegan candy, meat alternatives, and junk food on the market nowadays, vegan food can be just as “unhealthy” as food made from animal products. Most vegans are aware of this and practice moderation like everyone else.

A plant-based burger may not be healthier than a beef burger, but there’s nothing wrong with treating yourself every now and then.

Generally, the nutritional breakdown of meat is simply protein and a little bit of fat. For example, one 113-gram beef patty contains 262 calories, 16 grams of fat, and 28 grams of protein. There are no carbohydrates, sugars, or fiber in a beef patty (source: Nutritionix).

Meanwhile, a 113-gram Beyond Burger patty contains 250 calories, 18 grams of fat, and 20 grams of protein. This burger also has 3 grams of carbohydrates, 2 grams of fiber, and no sugar (source: Nutritionix).

So, if you simply swap out all the meat in your diet for plant-based meats, you might have to keep an eye on your protein intake as these products are often lower in protein but higher in carbs. Adding more carbs to your diet is not unhealthy – carbs are our body’s main fuel source!

All it means is keeping a closer eye on your macronutrient consumption to ensure you’re eating an appropriate balance of carbs, fats, and protein.

I hope this cleared up any concerns you might have had about potential chemicals in plant-based meat and burgers.

Can You Pour Olive Oil Down the Drain? Will It Clog?

How Many Clams in a Bushel? (Plus Costs)