Chicken Drumettes vs. Drumsticks – The Differences 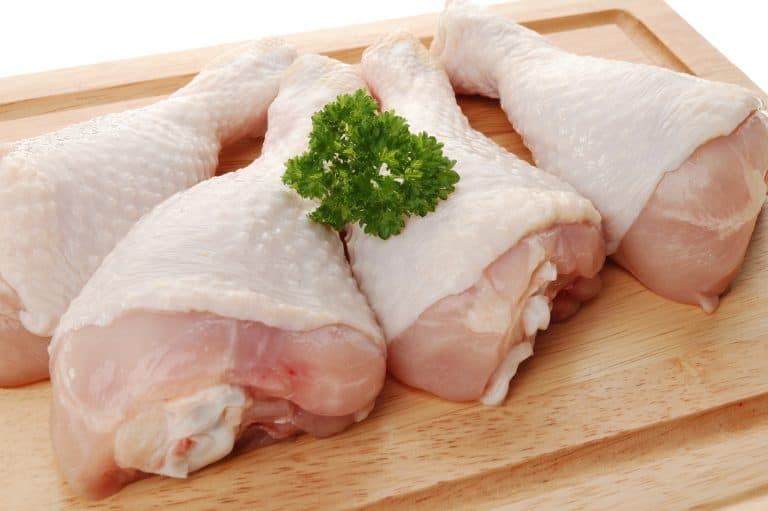 A chicken drumette is part of the chicken wing, while the drumstick is part of the leg. Their differences don’t stop there. Drumettes and drumsticks also differ in their size and taste, as well as the type of meat they contain. There are even differences in their fat and calorie content.

We will discuss the differences between chicken drumettes and drumsticks, including their fat and calorie content, meat classification, and the ideal cooking methods for these chicken parts. Then we will talk a little bit about chicken wings, their components, and what you can do in case drumettes aren’t available in your local stores. Let’s dig in!

What Part of the Chicken Is the Drumette?

The drumette is the part of the chicken wing directly attached to the body. It is composed of soft white meat and is juicier and meatier than the other wing parts. The drumette looks like a small drumstick.

Dark meats use glycogen and fat to fuel muscles to execute sustained movements. Chickens spend most of their time grazing and walking, and they have their slow-twitch fibers to thank for being able to do so.

White meats utilize only glycogen for energy. This is what chickens can thank for being able to flap their wings and dart away when they sense danger (source: The Exploratorium).

The white meat in chicken drumettes is suitable for people keen on having a heart-healthy diet. White meat contains fewer calories but more protein and B vitamins than dark meat. On the other hand, chicken drumsticks have more iron, vitamin C, and zinc because they have dark meat (source: MasterClass).

Another notable difference between chicken drumettes and drumsticks is the required cooking time. Drumettes are leaner and require a shorter cooking time. Overcooked drumettes will become dry and flavorless. On the other hand, drumsticks can be cooked longer to make the meat more tender and juicier.

There are many ways to cook chicken drumettes and drumsticks. They can be incorporated with different ingredients and different types of meat. Chicken is also considered one of the healthier choices among meats and is a favorite among many because of the flavor.

Chicken drumettes and drumsticks, in particular, are among the most versatile and preferred chicken parts.

Here are several different ways you can use to cook your drumettes and drumsticks:

While all of these methods are great for cooking chicken, some of them work better for drumettes, while others are more suited to drumsticks.

For example, faster cooking methods involving higher temperatures are generally best for the white meat in chicken drumettes. The dark meat in drumsticks, on the other hand, can handle longer cooking times without drying out. Drumsticks can withstand a wider range of cooking techniques and still be tender and flavorful (source: Recipes).

Remember that the meat should be white and not pink when cooking chicken. Raw chicken is contaminated with Clostridium perfringens, Campylobacter bacteria, and Salmonella. (source: Healthline).

Furthermore, consuming undercooked chicken can expose you to food poisoning and other foodborne illnesses (source: Centers for Disease Control and Prevention).

Are Drumettes and Wings the Same?

A lot of people like chicken wings because they are flavorful, juicy, and just the right size for certain recipes.

When it comes to calories, a serving of chicken wings (drumettes included) is about four pieces and contains approximately 50 calories per serving. Drumsticks contain roughly 84 calories per serving, which is generally one to two pieces (source: Recipes).

Where Can I Buy Drumettes?

You can buy drumettes from your local groceries, meat suppliers, delis, and online stores. Drumettes aren’t usually readily available, but wings almost always are. If you’re in a bind and need drumettes fast, buy wings instead because you can easily separate the drumette from the whole wing.

This is how to separate drumettes from wings:

Drumettes and drumsticks may look very similar, but they are actually two different parts of a chicken. Knowing their various characteristics will help you decide how best to cook them so that you can create tender, flavorful, succulent, and spot-on dishes.

Alcohol in Margaritas (How Many Will Get You Drunk?)

How Much Gluten Is in Soy Sauce? Brand Guide