Cupboard and Pantry, Techniques and Tips
March 5, 2019
by Cuisine Seeker
0

Lots of food is preserved in olive oil, so I wondered: can olive oil go off?

After some research I’ve found out that yes, olive oil can go off. Unopened olive oil lasts for about a year and a half. After you have opened a bottle of olive oil, use it within two months. After that, it can go rancid, oxidise and taste unpleasant. Even worse, I just found out that some olive oils have already gone bad by the time you buy them – even if the bottle’s still sealed.

How do I know if my olive oil has gone off?

The best way is to taste it, if it isn’t flavoured or infused. It’s a sad fact that so many restaurants serve old oil (usually the stuff you’re given to dip bread in) that some people are used to the taste of older, less fresh oils and might not be able to tell the difference.

Rancid olive oil tastes “greasier” than normal and usually has a flavour like gone-off nuts or plasticine. It should taste fruity, grassy and sometimes floral, not fusty or dank. Fresh oil gives you that pleasant peppery “kick” at the back of your throat, whereas an older olive oil won’t.

If you don’t want to taste it, then the sniff test is another good way to tell if your olive oil has gone off. Older oil should should smell of those same putty-like, fusty notes.

There are a handful of things that can make olive oil (whether extra virgin or not) go bad:

Olive oil is not like wine – it won’t improve with age.

Will expired, old or rancid olive oil make me ill?

Gone-off olive oil won’t taste nice, but usually it won’t make you sick. Beware, however, of infused, flavoured or home-made oil products. These are ones such as garlic oil, herbal infused oils, and other similar olive oil products.

The oil itself isn’t the culprit, it’s the items in the oil infusion – botulism spores thrive in these sorts of conditions and can make you very ill indeed. Unless its straight olive oil with no additions or flavourings, it’s better to throw it away rather than even testing it to see if it’s gone bad.

How to store olive oil (and does olive oil go bad in the fridge?)

Since olive oil doesn’t do well in warm environments, you can store olive oil in the fridge quite happily. If you live in a cooler climate, like I do in the North of England, then this usually isn’t necessary. Make sure it’s in a cool cupboard away from the oven, toaster or other heat-emitting devices in your kitchen.

Fridge lights go off when you close the door, so the fridge is also a good place to make sure your olive oil is stored in a dark place. Again, it doesn’t have to be the fridge, just choose a cool, dark cupboard or shelf. Olive oil doesn’t like humid places so if your kitchen is warm or stuffy, try to keep it somewhere else where it will remain cool, dark and dry.

You can freeze olive oil, but this will make it solidify, so usually it’s just best to keep it somewhere cold.

My olive oil is cloudy and/or has white spots. Has it gone off?

If your olive oil sets, gets thicker, goes cloudy or has white solids in it, it usually means its 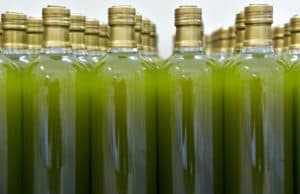 been stored somewhere cold, like the refrigerator. Don’t worry, the cloudiness will disappear when the oil is brought back to room temperature. The quality isn’t affected, and you can use it as normal.

A myth still travels around the internet that such cloudiness or solidification means the the olive oil is impure, and that you can rely on this as some sort of “olive oil impurity test” . It isn’t true. White solids are not signs of impurities or defects.

Unfiltered olive oil, which is perfectly good, often has white, waxy deposits or cloudiness in it at slightly higher temperatures. If you want to clarify it, just heat it up a little.

What to do with unused but still fresh olive oil

If you’ve served olive oil in a dipping dish or similar and have some left over, don’t be tempted to pour the unused oil back into the bottle. The oil in the dish will be more oxidised than the olive oil in the bottle, and you’ll also be inadvertently pouring tiny food particles (mmm, focaccia) back in there, which accelerates the deterioration of the whole bottle. Use it up within a day or two by mixing it into a salad dressing or cutting it with veg oil for frying (yes, you can fry with olive oil).

Chucking old olive oil down the sink pains me, because I try not to waste food and attempt to re-use and recycle as much as I can. Some ideas for using rancid olive oil are:

Overall, it’s worth buying quality in small quantities when it comes to olive oil. Stored properly, it will last for a long enough time for you to enjoy it and taste it how nature intended it to be – fresh, grassy, peppery, green and delicious!

No Older Articles
Next Article

Chinese Vs. Italian Pine Nuts: What you need to know

UK Guide To The Best MCT Oil And Its Benefits

Where to buy Palestinian Olive Oil in the UK and USA

Buying bulk wholesale and clearance food – is it worth it?

Cuisine Seeker April 14, 2019
Looking for something?
Ezoic Wrap Adsense Sidebar
You may also like…
Legal Information

Cuisine Seeker is owned and operated by Ginger Trading, a participant in the Amazon Services LLC Associates Program, an affiliate advertising program designed to provide a means for sites to earn advertising fees by advertising and linking to Amazon.co.uk and Amazon.com. Ginger Trading also participates in affiliate programs with other sites. Ginger Trading may be compensated for referring traffic and business to these companies at no additional cost to you.