Frozen pizzas are inexpensive, delicious, and insanely convenient. Most people keep a pizza or two stashed in their freezer for backup meals in a pinch or for those days when you get home from a … 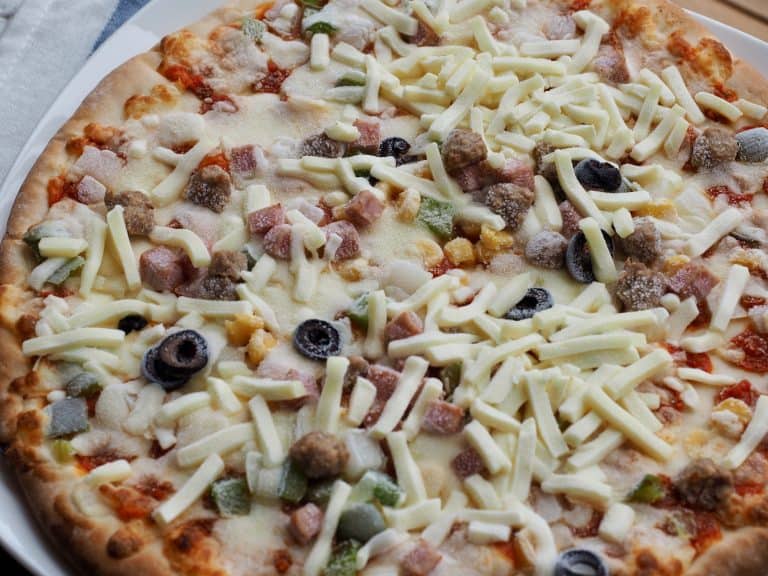 Frozen pizzas are inexpensive, delicious, and insanely convenient. Most people keep a pizza or two stashed in their freezer for backup meals in a pinch or for those days when you get home from a long day at work and just don’t feel like cooking.

An interesting question, though, is, whether or not frozen pizzas are precooked.

Most frozen pizzas are not precooked, although there are a few exceptions to this general rule. Pre-cooked or not, all frozen pizzas should be adequately heated before consumption. Doing so will make the pizzas taste better and ensure they are safe to consume.

Though the answer to the question seems like it should be relatively simple, it does beg for some explanation. If you stick with us through this article, I unpack this answer further by looking at some common ingredients in frozen pizza as well as some specific brands of frozen pizza.

Overall, most frozen pizzas are not already cooked before being frozen. However, there are a few specific brands that do precook their pizzas before freezing them.

Table 87 is an example of a company that fully cooks its pizzas before freezing them. This Brooklyn-based pizzeria started in 2012 as a single store but has since expanded into three restaurants and a frozen pizza distributor. All Table 87 pizzas are fully cooked in a coal oven before being frozen (source: Table 87 Coal Oven Pizza).

The kicker here is that Table 87 explicitly states on their website and packaging that their pizzas are fully cooked before being frozen.

This is quite rare, though – if this information is not displayed on the packaging, you can assume a pizza has not been cooked before being frozen.

Can I Eat a Frozen Pizza Without Cooking It First?

Generally speaking, eating a frozen pizza without cooking it first isn’t a good idea. Even if the ingredients are precooked before being frozen, you risk consuming bacteria by not properly reheating your frozen pizza.

Let’s look at a few frozen pizza brands to answer this question further:

Now let’s take a look at the individual components that make up frozen pizzas. Doing so may help you better understand why you shouldn’t eat them without cooking them first.

Dough: Pizza dough is not cooked before it goes into the oven; therefore, it is not usually cooked before a pizza is frozen. According to the CDC, consuming raw dough can make you very sick.

Raw flour can contain harmful bacteria such as E.coli, and consuming raw eggs can heighten your risk of contracting salmonella (source: CDC). It is not safe to consume pizza if the dough is not cooked through.

Sauce: Pizza sauce is generally cooked before it’s ready to be used on a pizza. Most recipes for pizza sauce involve a slow simmer of pureed tomatoes and spices.

But, the pizza sauce is on top of raw dough and beneath layers of other ingredients, so you still can’t consume the sauce without reheating the entire pizza safely. You might also be interested in how long pizza sauce typically lasts.

Cheese: Though raw cheese is perfectly safe to consume, it is never cooked before a pizza goes into the oven.

And while uncooked cheese may be tasty in some dishes, you probably won’t enjoy it on your pizza. After all, the gooey, melted cheese is part of what makes pizza so yummy.

Vegetables: Raw vegetables are perfectly safe to consume, but most are fully or partially cooked before being added to frozen pizzas.

Mushrooms, root vegetables, broccoli, onions, and peppers should be fully cooked before being added to pizzas. Leafy greens like kale and spinach should be lightly sauteed beforehand.

Meats: Like with veggies, most meats are partially cooked before being added to pizzas, but there’s still danger to consuming pizza containing meat that hasn’t gone into the oven.

How To Tell if a Frozen Pizza Is Already Cooked

It is never safe to assume that a frozen pizza is already cooked or that it can be consumed before being reheated.

So, how do you know for sure that a frozen pizza is already cooked?

Look at the packaging. Unless the packaging explicitly states that a frozen pizza has been precooked, it is doubtful it has been.

If you’ve looked at the packaging and are still unclear, do some online research.

On their website, Chicago deep-dish style company Pequod’s Pizza states that all of their pizzas are fully cooked before being frozen (source: Pequod’s Pizza).

Jack’s pizza website notes on the cooking instructions of their website that their pizzas must be cooked through to be safe (source: Jack’s).

With quite a few exceptions, most frozen pizzas are not precooked. The best practice with frozen pizza is reading and following all cooking instructions before consuming.

If you’ve cooked a pizza and want to know how long you can keep it hot for, I covered the holding temperature for pizza, too. Buon appetito!

Does Seaweed Make You Gassy or Fart More?

Old Breadsticks: How to Eat or Use Them