Is Garlic and Garlic Bread Vegan?

One of the frustrating things about veganism is discovering lots of seemingly plant-based foods actually contain animal products, including garlic bread and some garlic dips. Garlic is vegan. It can be hit or miss when … 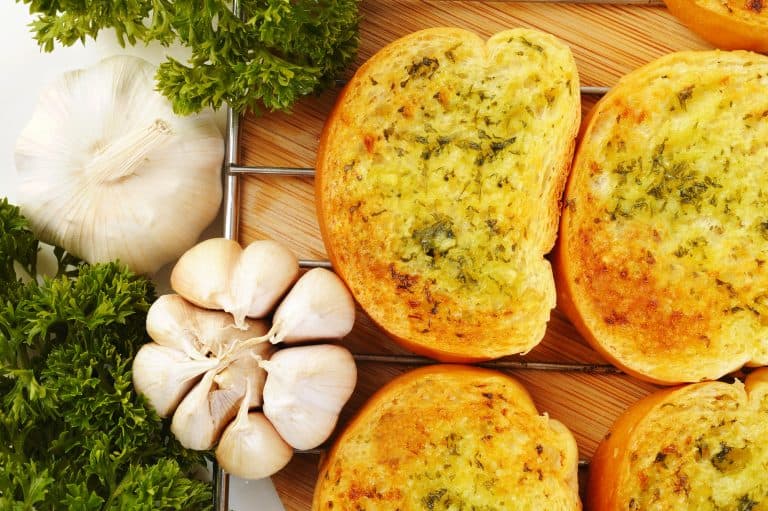 One of the frustrating things about veganism is discovering lots of seemingly plant-based foods actually contain animal products, including garlic bread and some garlic dips.

Garlic is vegan. It can be hit or miss when it comes to garlic bread, garlic rolls and dips. It’s easy to make vegan garlic bread but lots of brands and restaurants will use butter or cheese, making it unsuitable for vegans.

We’ll guide you through what you need to know about finding vegan garlic bread and other garlic products.

Garlic comes from the bulb of the garlic plant. This makes it naturally plant-based and vegan if you are consuming garlic in its pure form i.e. not in a sauce or on garlic bread. Garlic powder and garlic salt are also vegan as they are made from pure ground and dried garlic cloves.

You might have seen some claims that garlic and onion are not actually vegetarian. These claims are linked back to Ayurveda. Ayurveda is an Indian alternative medicine that does not endorse consuming large amounts of garlic because it is considered rajasic, meaning it can disturb sleep and make you feel lethargic.

So, if you do not practice this medicine, then you don’t need to worry about garlic as a vegan or vegetarian.

Generally, garlic bread is not vegan but it is possible to make a vegan version.

Garlic bread is made from bread, garlic, butter or olive oil, and herbs such as oregano, basil or chives. The bread is usually from a baguette, which is typically vegan-friendly.

A rule of thumb is dense, small loaves of bread used to make garlic bread are more likely to be vegan than bigger, fluffier loaves of bread. Of course, there are sometimes exceptions, so continue to check the ingredients list when buying bread.

The garlic sauce and toppings are usually the reason it is not vegan. If you are making your own garlic bread, store-bought garlic butter is usually non-vegan because it contains real butter so you will have to find a vegan brand or make it yourself.

Garlic bread is usually coated with melted butter. Some people will use oil instead of butter to make it vegan.

It can also be topped with cheese, but this is not always the case. So, unfortunately, asking for garlic bread with no cheese is unlikely to make it vegan.

While it can also be made with a vegan butter, oil and topped with vegan cheese, most restaurants and brands use dairy butter. If you’re not sure your garlic bread is vegan, it’s best to ask or skip it entirely. If it is not clearly labeled as vegan, it’s unlikely to be vegan.

Where Can I Get Vegan Garlic Bread?

Garlic knots are usually not vegan.

Garlic knots are knotted pizza dough topped with butter, garlic, and parsley. Generally, pizza dough is vegan-friendly, but this is not always the case. The main concern is still the toppings.

Like garlic bread, these can be topped with vegan butter or oil. However, most brands and restaurants made garlic knots with dairy butter. So, if you’re not sure, be sure to ask the restaurant or skip the garlic knots entirely if they are not clearly labeled as vegan.

They are also sometimes topped with cheese. If they already contain butter, asking for no cheese will not make them vegan.

With that said, there are lots of well-known restaurants and brands selling vegan-friendly garlic dipping sauce for pizza. When it comes to multi-national restaurants, the garlic sauce ingredients might vary from country to country, so you should double-check before ordering.

Dominoes Garlic Sauce: Donimoes’ garlic & herb sauce appears to be vegan in the US.

Pizza Hut’s Garlic Dipping Sauce: the regular garlic dipping sauce is vegan, but it should go without saying, the garlic parmesan sauce is not.

I hope this cleared up any concerns you had about garlic, garlic bread, and other garlic foods as a vegan.

Can You Make Sushi with Trout?

Does Butter Boil? At What Temperature?