How Much Gluten Is in Soy Sauce? Brand Guide

Ever wondered how much gluten soy sauce contains? Soy sauce is delicious when drizzled over your noodles or for giving that umami punch to your sushi, but it might not leave you feeling great if … 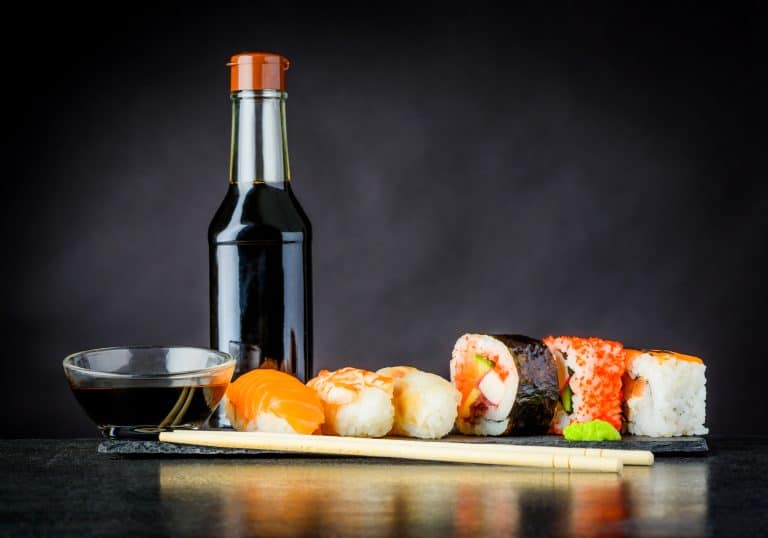 Ever wondered how much gluten soy sauce contains? Soy sauce is delicious when drizzled over your noodles or for giving that umami punch to your sushi, but it might not leave you feeling great if you’ve got a gluten intolerance or celiac disease.

Knowing how much gluten is in your soy sauce can help offset these stomach upsets, giving you more control over your diet.

Soy sauce contains about 5 ppm (parts per million) of gluten. However, this is an estimate. Different types and brands of soy sauce have differing levels of gluten. The reason is that, during the making of soy sauce, soybeans are brewed and fermented with wheat.

The rest of this article will delve into why soy sauce contains gluten. We’ll go over the types of soy sauce that contain gluten and some gluten-free alternatives for you to try.

Why Does Soy Sauce Have Gluten?

You may be surprised to know that soy sauce contains gluten. The gluten content certainly isn’t as apparent as it might be in a piece of bread, but unfortunately, any celiac sufferers will need to know that they may not be able to eat certain brands of soy sauce.

Soy sauce has gluten because wheat is one of its ingredients. Soy sauce is made through a process of fermentation, where wheat is brewed with soybeans to create an umami, salty flavor.

Due to this process, it isn’t safe for those avoiding gluten to eat many types of soy sauce (source: Healthline).

Wheat is an essential component of soy sauce. The majority of brand soy sauces contain gluten, so you’ll need to be careful at the store.

How Much Gluten Is in Soy Sauce, on Average?

Most soy sauces contain gluten, so you’ll likely want to know how much of it they contain. If you’re allowed a certain amount of gluten per day, you may indeed be able to eat soy sauce in small quantities.

There are 5 parts per million of gluten in soy sauce, on average. It’s a little more in some brands, but it generally sits just below 5 ppm. If you’re a celiac, you shouldn’t consume more than 0.0018 oz (50 mg) of gluten per day, so a little bit of soy sauce may be ok for you.

Light and dark soy sauces generally contain the same amount of gluten. The most significant difference between the two is that dark soy sauce has been fermented for much longer and sometimes contains molasses.

The good news is that molasses doesn’t contain any gluten, which means dark soy sauce has no more gluten than its lighter counterpart (source: University of Arizona).

Some soy sauces contain no gluten—or almost no gluten. An excellent example of this is Tamari soy, which has an almost negligible wheat content. If you’re avoiding gluten, this product is a safe bet (source: WebMD).

If you’re looking for gluten-free Kikkoman options, you may also want to consider the Kikkoman Naturally Brewed Soy Sauce, which is under the detection limit of 10 ppm. However, Kikkoman still recommends their Tamari soy sauce instead for celiacs (source: FAQ – Kikkoman).

This is great news for soy sauce lovers everywhere. In fact, there are more and more gluten-free soy sauce brands popping up!

Kroger soy sauce may not contain gluten, but it still contains soy. If you’re allergic to soy products, this isn’t the product for you (source: Allergen Inside).

La Choy soy sauce is gluten-free, making it appropriate for celiacs. Both the standard version and the “lite” version of La Choy Sauce are made without gluten.

If you want a low sodium alternative, La Choy soy sauce may be precisely what you’re looking for.

It isn’t often that those avoiding gluten get a choice between products, and La Choy is leading the way in wheat-free soy sauce options (source: La Choy).

In this sense, it isn’t exactly the same as the more traditional soy sauces on the market, but it tastes pretty similar to dark soy sauce (source: Japan Centre).

Paving the way for those with wheat intolerances to enjoy their favorite foods, Yamasa soy sauce claims to be ultimately gluten-free.

Can You Buy Gluten-Free Soy Sauce?

There are plenty of gluten-free soy sauce and tamari options available on Amazon – click here to see what’s available for delivery in your area.

Additionally, there are other ways to enjoy the flavors of soy sauce, and these alternatives will be lifesavers when the cravings kick in.

Always remember to check the ingredients on any product you buy. You can’t guarantee that any product is wheat-free, even if you’ve been using it for a long time. It’s also good to remember that brands are legally obliged to label their products clearly (source: FDA).

You might also be avoiding soy sauce because of the high sodium content. This is understandable—a diet high in sodium isn’t ideal for anyone.

Whether you’re looking for low-sodium options or avoiding wheat products, here are some gluten-free alternatives to soy sauce:

There you have it! There are lots of gluten-free soy sauce brands and exciting alternatives. Give those a try if you aren’t convinced by the gluten-free options. They might inspire your inner chef!

Chicken Drumettes vs. Drumsticks – The Differences

What Happened to Viniq? Was It Discontinued?