What Is Kani in Sushi? Tempura, Rolls, Salad, and More

Crabmeat is delicious, but it can be expensive and difficult to find fresh. Kani is a cheaper, more economical substitute commonly used in Japanese dishes. Kani is imitation crab meat made of fish paste mixed … 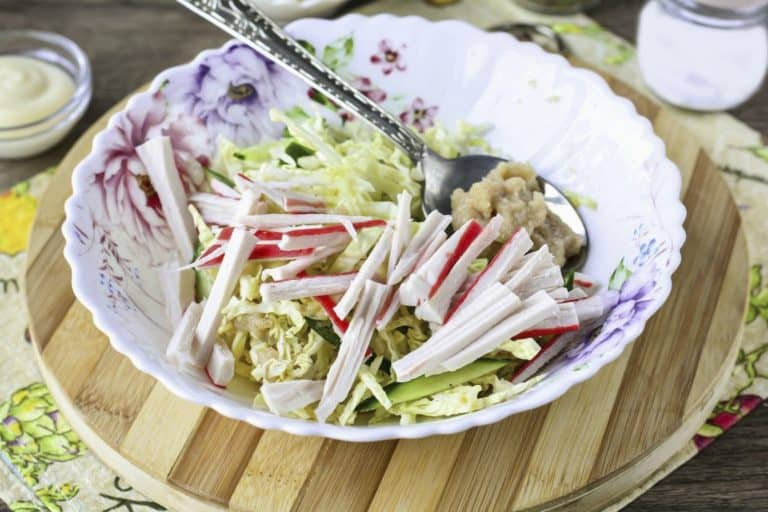 Crabmeat is delicious, but it can be expensive and difficult to find fresh. Kani is a cheaper, more economical substitute commonly used in Japanese dishes.

Kani is imitation crab meat made of fish paste mixed with additives for texture and flavor. It’s used as a garnish for many different sushi rolls and is the main ingredient in many salads.

In this article, I will teach you more about Kani and the different dishes this ingredient is used in. We also go over the health value of your typical Kani salad, a common Kani recipe.

What Is Kani in Sushi Made From?

Kani is made from imitation crab meat. It contains no actual crab meat, but it consists of mashed fish paste called surimi mixed with additives to improve flavor and texture.

To make surimi, you mash a combination of different fish such as Alaskan Pollock or Pacific Whiting. This process produces a gel-like substance. Surimi is the base ingredient for Kani.

Manufacturers then add additives like egg whites, starches, sugars, and sometimes MSG to enhance the flavor and texture of the product. Much of commercially-sold Kani isn’t gluten-free since it uses glutinous additives to give it a dense, crab-like texture.

To produce and maintain the crab-like texture of the meat, Kani makers use much water during production. Vibrant red food coloring is also added to one side of the outer layer of the crab stick to make it appear more like real crab meat.

When you purchase Kani at the store, you’re likely to come across their most common form – the crab stick or the crab leg.

Some recipes that feature Kani are:

Many Japanese restaurants have unique recipes for various sushi rolls that include Kani as an ingredient.

Kani is a more economical substitute for actual crab meat, and it lasts longer, making it safer than imported crab meat from hundreds of miles away.

Kani is cooked before it is packaged and sold. So, no further heating or cooking is necessary for most Kani recipes. However, some recipes, such as Kani tempura, call for the Kani to be cooked slightly.

The paste used for Kani is molded into various shapes before it is pasteurized through steaming. That means Kani can be eaten or served straight out of the package when it’s thawed. Most people eat it chilled or at room temperature.

Other recipes like Kani tempura or fried crab sticks are deep-fried with or without batter. You may also want to bake Kani when creating a sushi bake recipe.

However, some people say that heating or cooking crab sticks too much destroys the Kani’s crabby flavor and texture. So, I recommend sticking to classic chilled Kani recipes.

What Is in Kani Salad?

Kani salad is made with shredded Kani, various fresh vegetables, and Japanese mayonnaise. Some recipes call for additional ingredients, but you will always need Kani and mayo.

There are different variations to the recipe of Kani salad, but the main ingredients in the majority of recipes are:

If you’re looking to try out Japanese recipes at home, Japanese Kewpie Mayonnaise (available on Amazon) is perfect because it’s used in many Japanese foods in salads and as a dipping sauce or a topping.

Some other optional ingredients that also used in Kani salad are:

Amazon.com has Kikkoman Ponzu sauce that is a great addition to your Kani salad. It’s also a good dipping sauce for sushi and sashimi. You can also use this ponzu sauce to bring out the flavors of your vegetable, meat, and poultry dishes.

Kani salad isn’t spicy, but some people add other ingredients to it to make it spicier. Many people add sriracha sauce to their Kani salad to give it a spicy kick that fits the salad’s savory flavor profile.

Kani salad on its own has a light and fresh taste paired with the creaminess of Japanese mayonnaise, the sweetness of the Kani, and the crunchiness of other ingredients like carrots and cucumber.

For your next batch of spicy Kani salad, you can use Huy Fong Foods Sriracha Sauce. It is a mix of chili paste and garlic packaged in a convenient squeeze bottle. You don’t just have to have it for Kani salad – you can use it on pizzas, hot dogs, hamburgers, and even soups and pasta.

Kani salad is healthy, but you might not want to eat it as an everyday snack. Though containing beneficial nutrients, vitamins, and proteins, Kani salad still has some ingredients that can have adverse effects on health if you consume too much.

Kani salad’s main ingredient, Kani, is a highly processed food. It contains many additives, artificial flavorings, and sometimes MSG to give it an extra savory flavor. (Source: Healthline)

However, mayonnaise, in general, is a condiment that is considered very high-fat and high-calorie. (Source: Yahoo! Life)

These can somewhat be offset by the nutrients and vitamins you can get from the fresh vegetables in Kani salad.

Sometimes used as a topping for Kani salad, Tobiko is rich in protein and omega-3 fatty acids that can be good for a healthy heart. So there are ways to make Kani salad healthier. (Source: Medical News Today)

What Is Kani Tempura?

Kani tempura is imitation crab meat dipped in a batter of egg, flour, and ice water. It is then deep-fried to create a light and crispy coating with a pleasant crunchiness.

If you’re a little worried about getting the mixture for the tempura batter correct on your own, you can buy a tempura batter mix to make things easier. Amazon.com offers Kikkoman Tempura Mix that makes for extra crispy tempura.

If you don’t have the ingredients to make tempura dipping sauce at home, you can get this Kikkoman Tempura Dipping Sauce. It’s the perfect companion to any tempura and will allow you to eat Kani tempura the way it was meant to be served.

I hope this encourages you to try out some different Kani dishes, now you know what it is!

How Long Is Plant-Based (Vegan) Meat Good For?

Does Seaweed Make You Gassy or Fart More?