Do All Tuna Fish Have Scales and Fins? Species Guide

Tuna is one of the tastiest fish out there, and it has many health benefits. But does it have scales and fins? And, is it considered kosher (pure for consumption) in Jewish tradition?  All tuna … 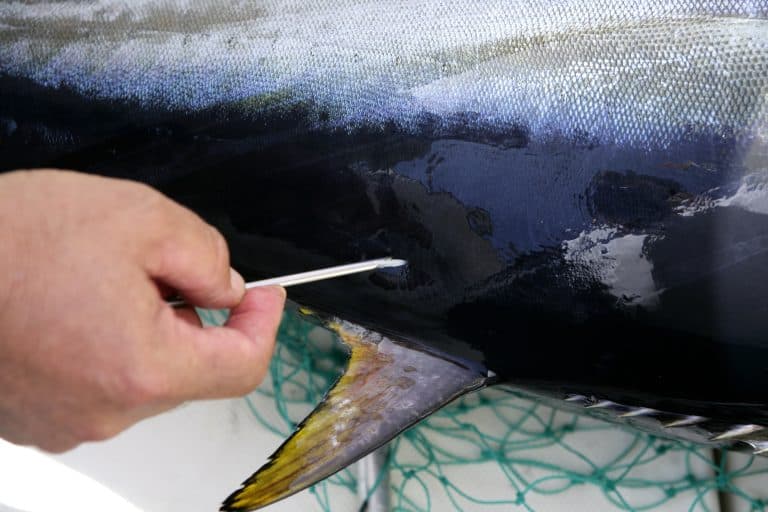 Tuna is one of the tastiest fish out there, and it has many health benefits. But does it have scales and fins? And, is it considered kosher (pure for consumption) in Jewish tradition?

All tuna fish have scales and fins. Fins help the tuna breathe and swim, while scales protect them against predators. Since tuna fish have both fins and scales, they’re considered kosher (permissible to eat) in Jewish tradition.

In this article, I’ll cover over five variations of tuna and look into their scales in detail. I’ll also discuss whether each tuna type is certified kosher, too!

Do Tuna Fish Have Scales?

Scales on tuna fish aren’t as apparent as some other fish types, such as tilapia and pomfret. So, does tuna even have scales? If so, why can’t you see them?

Tuna fish have scales, which are known as “scutes.” These scales are small and few. They’re flat and hard, making them invisible to the naked eye! But, all variations of tuna have scales that can be easily perceived through a microscope.

Speaking of tuna variations, let’s briefly look at a few of them and the type of scales they possess.

Does Canned Tuna Have Scales?

All types of tuna have scales, even though you can barely see them. But what about canned fish? Are there scales in there?

Most canned tuna products do not have scales in them. Skin, dark-meat portions, and hard parts like bones and scales are generally removed from tuna before it’s packaged into cans.

During the cleaning and preparation phase before canning the tuna, the fish get sorted by size, pre-cooked, and cooled, followed by de-boning and removing their skin (source: ScienceDirect).

As you can imagine, tuna’s small scales get removed along with its skin.

The next step is to separate the meat into light and red meat, the former getting picked for the canning process while the latter is mostly processed into pet food. The loins for human consumption are then cleaned well before getting canned (source: Colorado State University).

Does Tuna Have Both Fins and Scales? Is It Kosher?

This question is popular among fish lovers within the Jewish community. So, are all types of tuna considered Kosher (pure for consumption)?

Tuna has fins and scales and is kosher. The Jewish law requires fish to have both fins and scales to be permissible or “pure” for consumption. While tuna fish has very few scales, they are considered certified Kosher since all tuna types meet both conditions.

Unlike fowl or meat, the Jewish rulings do not require fish to be slaughtered and salted to be consumed. All tuna fit the kosher category and can be served in a Jewish home in any shape or form (source: Chabad).

Canned tuna is also kosher as long as the meat used as an ingredient comes from tuna. However, to ensure that the specific canned product you buy is kosher, check the ingredients list to see if the company has added other fish into the mix and whether they are non-kosher.

Examples of non-kosher fish that may sometimes be mixed with tuna are:

Here are some tips to keep in mind to make sure the tuna you buy is certified kosher:

Can You Eat Tuna Scales?

Now that you know that all tuna fish have scales, the next question that arises is whether they’re safe and enjoyable to eat.

You can eat tuna scales, but you probably wouldn’t want to do so. Tuna fish skin and scales are very tough, and while they’re not particularly unhealthy for consumption, they’re not enjoyable or tasty either.

If you choose to eat tuna skin and scales, make sure to cook them as harmful bacteria live on the outer layer of the fish.

Note: Fish scales generally taste like nothing if consumed raw or uncooked. One Quora response described it as “eating a piece of plastic” (source: Quora).

In this article, I’ve tried to cover all there is to know about tuna, whether or not each of its types has scales along with their kosher status. I hope you found the information helpful, and happy tuna-eating!

How To Dispose of Loose Tea Leaves (Sink, Drain, Garbage Disposal, and More)

How Long Does Pizza Sauce Last in the Fridge? (Canned, Homemade, and More)