Veganism is not as simple as cutting out meat, dairy and eggs from your diet. So many unexpected foods can contain animal products, like marshmallows!  The good news is, there are actually tons of vegan … 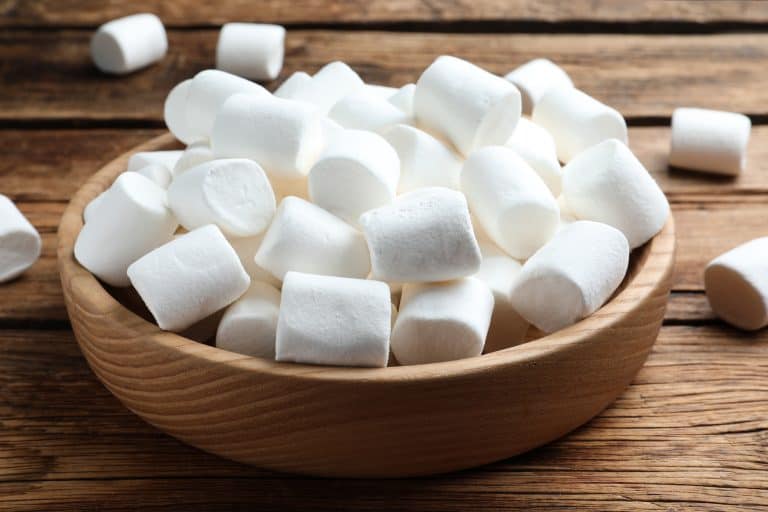 Veganism is not as simple as cutting out meat, dairy and eggs from your diet. So many unexpected foods can contain animal products, like marshmallows!

The good news is, there are actually tons of vegan marshmallows to choose from nowadays so you can enjoy this sweet-treat cruelty-free.

We’ll guide you through what you can expect from vegan marshmallows or whether they compare to regular ones.

What are Vegan Marshmallows Usually Made Of?

The average ingredient list for vegan marshmallows will contain some combination of the following:

Some ingredients might seem confusing, but they are in lots of foods, whether they’re vegan or not, so there’s no need to be concerned. Many of these ingredients are types of sugars, stabilizers, and emulsifiers.

Many types of refined cane sugar are not suitable for vegans (source: Green Queen). They do not contain animal products, but bone char is involved in the manufacturing process.

Brands rarely disclose whether the sugar they use is cruelty-free or vegan. If it is a vegan brand, or the product has clearly been labeled as vegan-friendly, there’s a good chance the sugar is vegan-friendly after all.

It’s up to you if you want to take the chance – or, you can reach out to the brand and ask.

Dextrose is a type of sugar that is made from wheat which is broken down into a simple sugar using water (source: Scratch In Food).

Tapioca starch and tapioca syrup come from the cassava root. It is diced, spun and washed until only pure starch and water remain (source: Bob’s Red Mill).

Carrageenan is derived from red seaweed (source: Scientific American). Beetroot extract might also be used to color marshmallows pink. These are both vegan alternatives to the red pigment carmine which comes from bugs.

Polyphosphate is a type of salt. It is actually originally from rocks! It can be found in plants too (souse: Frontiers).

Are Vegan Marshmallows Healthy or Good For You?

Vegan marshmallows are no healthier than regular marshmallows. There’s a misconception that vegan food is healthier by default but this isn’t the case. Junk food is still junk food.

Depending on the ingredients, vegan marshmallows could end up having more sugar or calories. For example, 10 regular marshmallows (which is around 15.6 grams) contain 50 calories and 9 grams of sugar (source: Nutrition Data).

Like regular marshmallows, the vegan ones should be consumed as an occasional treat.

Marshmallows typically contain gelatin. Gelatine is derived from animals. In particular, it is usually made from the connective tissue of cattle and pigs.

So, while marshmallows do not contain any ingredients like meat, milk or eggs, they are still not suitable for anyone on a vegan or vegetarian diet due to the gelatin content.

A lot of table sugar is not technically considered vegan either. White sugar does not contain animal products, but a lot of strict vegans will object based on the manufacturing process. This is because bone char is used as a decolorizing filter to create a bright white color.

If marshmallows are branded as vegan, they have likely used a different kind of sugar.

Can You Melt or Toast Vegan Marshmallows?

The problem with vegan alternatives to lots of foods is they can be inconsistent. You may have noticed that no two brands of soya milk taste the same – even if dairy milk can be virtually indistinguishable.  It’s the same thing with vegan marshmallows; some taste great, some don’t. You might need to try a few brands before finding one you like.

Lots of brands of vegan marshmallows melt deliciously in s’mores or toast well. The outside gets nice and crispy, but the inside does not always get as gooey as regular marshmallows do.

There’s no point trying to melt them in the oven or over a flame at a higher heat and hoping for the best; it will just get burnt. Approach vegan marshmallows like normal marshmallows when cooking and toasting.

However, they do usually seem to get just as soft and creamy in hot drinks.

Ideas on What Vegans Can Toast, Besides Marshmallows

If you would rather skip the marshmallows, vegans can toast peanuts, almonds and hazelnuts in a pan over a fire, which all make great alternatives.

For something a little closer to a marshmallow, you can toast a banana still in the peel over a fire.

Then spread the melted banana after removing the peel to a melted dark vegan-friendly chocolate and cookie – just like a s’more.

Can You Use Vegan Marshmallows to Make Rice Krispie Treats?

You can still make Rice Krispie treats with vegan marshmallows. They will probably come out tasting a little different to regular rice crispy treats.

The marshmallows do not seem to melt as evenly as regular marshmallows. This doesn’t seem to be a bad taste, as they create little pockets of gooey goodness (source: Nora Cooks). It will still taste fairly similar to the real deal.

I hope this cleared up any questions you had about vegan marshmallows!

What Does the Inside of a Blueberry Look Like? [With Pics]

Is Nutritional Yeast Vegan? If So, Why?