Do Watermelons Float? If So, Why?

Watermelons are huge balls of watery sweetness. A big, ripe watermelon can be pretty heavy to lug around, so the idea that it can float in water may not be the first thing that comes … 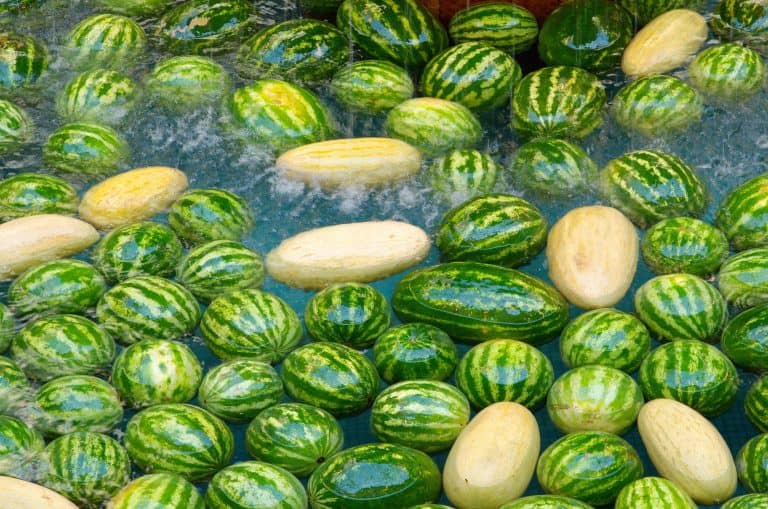 Watermelons are huge balls of watery sweetness. A big, ripe watermelon can be pretty heavy to lug around, so the idea that it can float in water may not be the first thing that comes to mind.

Watermelons do float despite their remarkable size and weight. This is because of their density relative to the liquid. Since watermelons are mostly water, they would be as or less dense than the water itself. This makes them buoyant, even if just barely.

You might be starting to look back on your experience of lugging a big watermelon at some point in your life. That recollection may make you think there’s no way watermelons can float, but they do, and you’ll understand why so by reading this article.

Do Watermelons Float on Water?

Different items and materials behave differently when placed on water. Some would float to the top and bob up and down as watermelons do. Others would sink through the liquid as the coins people throw into a wishing well.

Buoyancy, which is the tendency of items to float on a fluid, is affected by the object’s density relative to the fluid’s density.

The more compact an object is, the denser they are. Thus, materials like coins, which are denser and more compact than water, are not buoyant and would sink to the bottom (source: University Physics – Textbook Section 14.4).

Watermelons can float on water, even if just barely. They can do so because of their density relative to water. They are less dense or similar in density to the liquid, which allows them to float. Their density may be affected by the presence of cavities.

The idea of a huge floating watermelon may be easier to grasp if you have a way to picture it. Lucky for you, Purdue Extension Orange County has decided to have an experiment to see if a watermelon floats. Check it out through their YouTube channel:

Besides a watermelon, they also check other items like:

Do ALL Watermelons Float?

You might be curious if ALL watermelons actually float–after all, some may be denser than others or weigh heavier. A watermelon’s structure and density would significantly influence its buoyancy.

All watermelons would float, provided they have less or nearly the same density as water. Watermelon density can vary depending on hollowness and soluble solids. The more hollow the fruit is, the less dense it is.

These high-density fruits had fewer holes, cavities, or pores than other fruits. This trend supports the idea that the watermelon’s hollowness affects its density in an inversely proportional manner.

Why Do Watermelons Float?

As you may have guessed already, the density of watermelons is a decisive or influencing factor in their ability to float. Level 5 watermelons would be more buoyant than level 1 watermelons because of the low density and cavities, which may fill with air.

When an object is placed on water, two forces dictate whether it will sink or float. These forces are buoyancy and gravity. If the object’s force of gravity or weight is more than the force of buoyancy, more water than its weight will be displaced, making it sink.

However, if the object only displaces water less than or equal to its weight, the force of buoyancy can counter the force of gravity, letting it float (source: Britannica).

A single watermelon can have hundreds of seeds. But not all can be grown into a new watermelon plant. Their ability to float can be used to assess whether they have the potential to sprout or not.

Only dead watermelon seeds float on water. Thus, discard the floating seeds as they are not viable when selecting seeds to plant. Instead, choose those that sink to the bottom of a container.

Sorting out the healthy, viable seeds from the dead ones can help maximize your yield and ensure that resources are not spent on non-viable seeds.

Meanwhile, low-density, floating seeds are often dead and may not be viable when planted (sources: Gardening Know How, wikiHow). Thus, you can use density or buoyancy to assess your fruit or seed’s quality.

Can You Eat Cereal With Braces? Brands To Avoid

How Long Does It Take Chocolate To Harden? Timing Guide