Does Butter Boil? At What Temperature?

As a chef, I love cooking with butter. One of the qualities that make butter so convenient to use is that you can cook it in several different forms. However, can you boil butter, and … 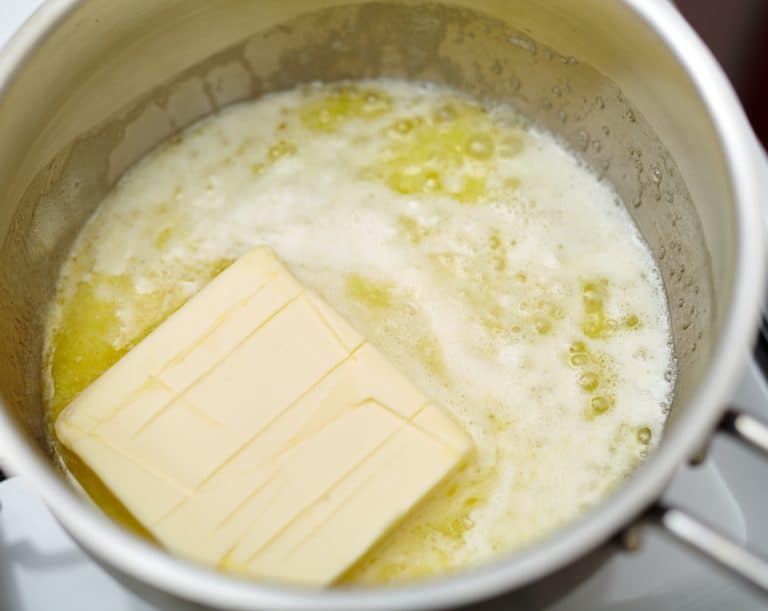 As a chef, I love cooking with butter. One of the qualities that make butter so convenient to use is that you can cook it in several different forms. However, can you boil butter, and if so, at what temperature does butter boil?

Butter boils, but not the same way that most liquids do. Butter consists of water and fat solids, and while the substance will bubble right as the water content starts to boil at 100°C (212°F), the fat solids will continue to burn until they reach their smoke point at 177 °C (350°F).

In the rest of this article, I’ll explain the butter boiling process more in-depth. Moreover, I’ll tackle the age-old question of whether cooking (or, in this case, boiling) butter affects its calorie content.

Butter technically boils, but not in the traditional sense of the word. The ingredient as a whole starts bubbling once its water content reaches its boiling point. However, only the liquid evaporates, leaving behind a layer of milk solids that will simply burn once they reach their smoke point.

In short, while cooking butter at a high enough temperature will lead to bubbling and the release of some vapors, which is the Merriam-Webster definition of boiling, this process is only carried out by the water content found inside the ingredient. (Source: Merriam-Webster).

When the liquid evaporates, you’ll have a film that comprises a layer of casein protein on the bottom and a layer of whey protein on top. (Source: ScienceDirect).

For simplicity, I’m referring to this film as milk solids, or the solid matter left behind after all the liquid inside the ingredient evaporates. If you continue to cook butter long enough after this point, these solids will start reaching their smoke point (more on this in the following section).

While the butter will release some vapors after this point, these solids will never fully evaporate, leaving a black, burnt film behind.

Note that throughout this article, I’m talking about regular butter. If you want to know about browning or boiling vegan butter, you’ll need this article instead.

At What Temperature Does Butter Boil?

Butter starts boiling at 100°C (212°F) at sea level. Butter consists of water and milk solids, and only the former evaporates between the two. Therefore, as soon as the water content reaches its boiling temperature, the butter will start to bubble and evaporate.

As mentioned, the liquid found in butter is the only matter that fully evaporates. Therefore, the boiling point of butter will be the same as its liquid content (in this case, water). Thus, the butter starts bubbling at 100°C (212°F).

Boiling butter does not affect its calorie content. A calorie is a metric unit of energy, and cooking can neither create nor destroy energy. Therefore, the caloric value of butter will remain the same regardless of how you cook it.

The first law of thermodynamics states that energy can’t be created or destroyed; it can be conserved and changed from one form to another. Considering that calories are a measure of energy, no cooking approach will be able to alter the caloric content of a particular ingredient. (Source: Estrella Mountain).

However, some sources claim that boiling (or any cooking approach that requires excessive heat) actually increases an ingredient’s calorie content, as the food absorbs additional energy from said heat.

Even though this is a claim that’s still going through the research process, it’s something to consider if you’re particular about your dietary needs. (Souce: Forbes).

That is everything you need to know about the butter boiling process, which is not as straightforward as you might’ve thought. Also, if you’re curious about how much water is in butter, I covered that here, too.

Is Garlic and Garlic Bread Vegan?

Calories and Fat in Salmon Skin: What You Should Know