If you’re on the Paleo diet, you probably already know that eating out can sometimes be challenging. It’s hard to tell if some cuisines are safe, particularly foods like sushi. Sushi is not Paleo. It … 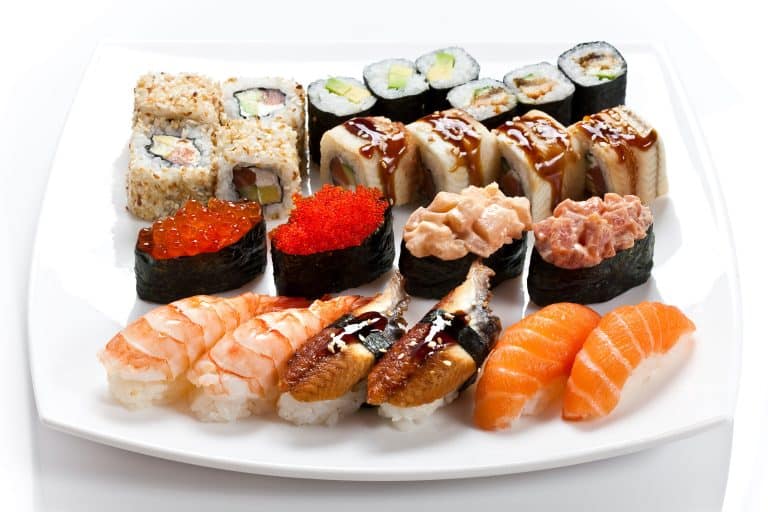 If you’re on the Paleo diet, you probably already know that eating out can sometimes be challenging. It’s hard to tell if some cuisines are safe, particularly foods like sushi.

Sushi is not Paleo. It is a Japanese food consisting of seafood or vegetables wrapped in rice and dipped in soy sauce. Rice and soy sauce contain grains, which are not Paleo. Even so, many foods sold at sushi restaurants, such as seafood and vegetables, are Paleo-friendly.

While sushi rolls may not be Paleo, they are not the only thing on the menu. Read on to learn what your Paleo-friendly dining options are at a sushi restaurant.

Is Sushi Paleo-Friendly? Why/Why Not?

When considering whether sushi is Paleo-friendly, you should clarify what the term means.

Traditional sushi is not Paleo-friendly since it includes rice and soy sauce. Both rice and soy products are not allowed on the Paleo diet. However, sushi restaurants often carry other Japanese dishes such as sashimi, seaweed, and sliced vegetables which are Paleo.

When people think of sushi, they usually think of rolls filled with raw seafood and goodies wrapped in soft rice and dipped in soy sauce.

Rice is a grain, and soy sauce is made with legumes and wheat– all products our Paleolithic ancestors did not consume. A UC Davis Health blog describes how the Paleo followers believe these items have led to many modern-day health issues such as obesity and chronic illness (source: UC David Health Blog).

Because of these sushi staples, you might think that sushi isn’t Paleo-friendly.

Thankfully, sushi restaurants don’t just serve rolls, and offer some Paleo-friendly options. While they might not technically be considered sushi, other seafood and side dishes are safe to eat on this diet.

Seafood, meat, veggies, and seaweed are all Paleo-friendly foods and staples in the Japanese diet. You’ll also find them at most sushi joints.

Sushi Options When You’re on a Paleo Diet

If you’re heading to a sushi restaurant, rest assured there are Paleo options on the menu!

Some items are inherently Paleo, while others can be tweaked slightly. Don’t be afraid to ask for things without rice or sauce. It can be easy to make an otherwise non-Paleo option suitable to eat.

Let’s check out some Paleo options at a typical sushi restaurant.

Sashimi is raw fish served on its own. It doesn’t get much more Paleo than raw animal products! Not only is it delicious, but it’s packed with nutritional benefits. Some standard sushi options include:

Seafood or Meat Cooked Without Sauces

Sushi restaurants usually have grilled or baked seafood or meat dishes on their menu. However, they often have sauces, which usually have sugar or grain products and are not Paleo.

For a Paleo-friendly option, you’ll simply need to ask for these to be cooked without any sauces.

Seaweed salad, or wakame, can be Paleo, depending on how it’s made. The seaweed itself is definitely Paleo and is also highly nutritious. However, it’s sometimes made with rice vinegar, soy sauce, or mirin.

Ask for it to be served without sauce or only with sesame sauce and sesame seeds– both Paleo-friendly ingredients.

Coconut aminos make an excellent substitute for soy sauce. Although most restaurants probably won’t carry it, you can always bring some of your own, and any good restaurant won’t mind it if you use it on the table.

Once your food arrives, you can add it as a sauce or dip.

Maki or Hand Rolls Without Rice

Maki and hand rolls stand out in the sushi world because they come with fillings like sushi rolls but are also wrapped in seaweed sheets, or nori.

However, they do come with rice. If the chef is pretty accommodating, get these options without the rice and make sure you opt for Paleo-friendly fillings.

Sushi restaurants often serve thinly sliced veggies such as carrots, cucumber, asparagus, microgreens, and sprouts as garnishes. They are usually served on the side of a dish and can be consumed as you wish. These are all safe to consume on the Paleo diet. Make sure they don’t come drizzled with any sauce, though!

The most prominent garnish and sushi roll stuffing may be cucumbers. Cucumbers are safe to eat on the Paleo diet. Since they are usually plentiful in Japanese restaurants, you can ask the chef to replace rice with cucumber in several dishes such as rice bowls, maki, and hand rolls.

Radishes often come shredded and balled up as a garnish in many sushi restaurants. They have a light, crisp texture and have just a hint of sweetness.

Radishes are also Paleo and can be used as a substitute for rice or noodles in many dishes. Even if they aren’t on the menu, it should be easy for the restaurant to prepare some for you.

Sushi Foods That Are Not Paleo-Friendly

If you’re heading to a sushi restaurant but want to eat Paleo, there are Paleo-safe options available. You may need to get creative, but you can have sushi on the Paleo diet.

Is Coconut Sugar Paleo? Why or Why Not?

Is Sausage Paleo? A Guide to Sausage Types