Cheese can be a hard thing to give up when going Paleo. You might be wondering if you can still eat certain types of cheeses on the diet, such as feta. Feta cheese isn’t allowed … 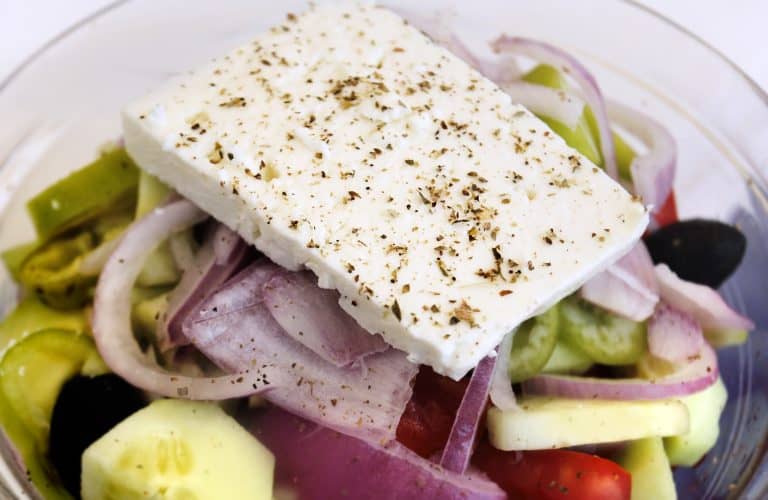 Cheese can be a hard thing to give up when going Paleo. You might be wondering if you can still eat certain types of cheeses on the diet, such as feta.

Feta cheese isn’t allowed when following a strict Paleo diet. This is because our hunter-gatherers didn’t consume dairy products, and it’s considered inflammatory. However, many Paleo dieters make an exception for feta because it’s made from sheep’s milk and is easier to digest.

Read on to understand why feta cheese isn’t considered Paleo and whether or not you’re willing to make an exception.

Why Is Feta Cheese Not Paleo-Friendly?

Cheese isn’t allowed on a strict Paleo diet because it’s a dairy product. The Paleo diet emphasizes eating like our Paleolithic ancestors and choosing foods for optimal health and digestion. Dairy, as well as cheese, has lactose and is known to be inflammatory.

However, Paleo diets do include animal products such as butter from grass-fed cows because of their high nutritional value. So consuming cheese from grass-fed animals isn’t a huge stretch.

Do Some People Eat Feta on Paleo?

Feta is one of those grey areas, where some people following the Paleo diet decide to eat it, and others claim it’s not “allowed”. It really depends how strict you want to be.

Cheese isn’t allowed on a strict Paleo diet. However, people who don’t follow the Paleo diet strictly often opt for goat or sheep’s cheese, like feta or aged cheeses. Cheese from grass-fed rather than grain-fed animals is also more Paleo-friendly.

While cheese may not technically be Paleo-friendly, many Paleo followers occasionally make an exception for this dairy product.

Paleo diets also encourage lower carbohydrates like our ancestors most likely consumed. According to BMC research, Paleo diets are low in simple sugars which has a positive impact on blood sugar regulation (source: BioMed Central).

Many dairy products like commercial milk are high in these sugars and carbs, making them less Paleo-friendly.

However, cheese is naturally higher in fat and protein and low in carbs. So it actually fits the bill as far as macros are concerned.

Assuming you don’t have lactose intolerance, your body may be able to digest cheese in moderation. So if it doesn’t have inflammatory effects, you might be lucky enough to make an exception for this tasty item.

Feta is traditionally made from sheep’s milk but can be produced with a combination of cow, sheep, and goat milk. You may think this might make it Paleo, but you’d be in for a surprise.

Sheep cheese isn’t Paleo because it’s made from sheep’s milk. Milk from cows, goats, and sheep is all considered dairy. Therefore, it can’t be considered Paleo in the strictest sense.

You might feel disappointed hearing that all cheese isn’t considered Paleo. If you want to stay strict with your Paleo diet, but you’re looking for something similar to feta cheese, read on to learn about potential Paelo-friendly substitutes.

Suppose you want to stay strict but have trouble giving up some of your favorite foods. In that case, you can try a Paleo-friendly alternative. Nowadays, you can find Paleo cheese replacements of all kinds, including feta.

You may also see dairy-free or vegan cheese options in stores. Some may be Paleo-friendly, while others are full of processed chemicals and other non-Paleo-approved ingredients. Always read the ingredient labels to know for sure.

Deciding whether you can eat feta cheese on a Paleo diet is a matter of opinion. While strict followers avoid dairy of all kinds, many people consume cheese in moderation if it doesn’t cause them digestive distress.

No, Popcorn Isn’t Paleo – And Here’s Why