Do Olives + Olive Oil Give You Gas or Bloating?

Some people find themselves feeling gassy and bloated after consuming olives or olive oil – despite these foods not being regarded as flatulence-causing foods the way beans are. So, it’s natural to wonder if olives … 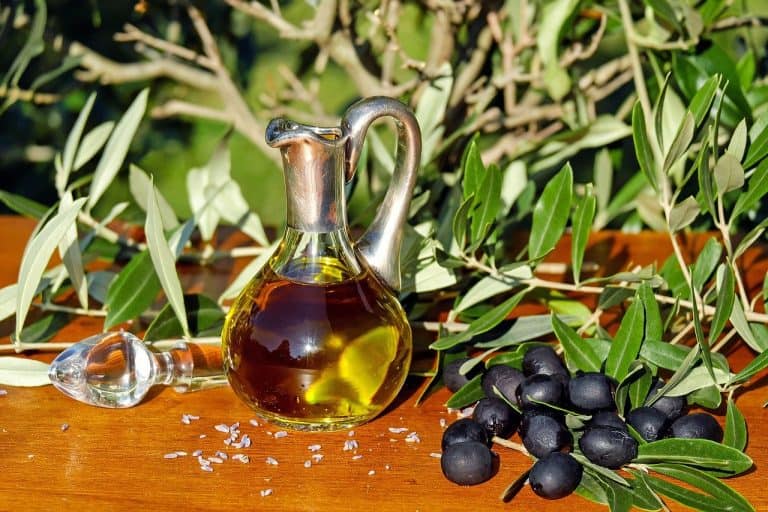 Some people find themselves feeling gassy and bloated after consuming olives or olive oil – despite these foods not being regarded as flatulence-causing foods the way beans are. So, it’s natural to wonder if olives or olive oil cause this or if it is just a coincidence.

The type of fiber in olives and fat content, paired with some of the ingredients in stuffed olives and flavored olive oil, like chili or garlic, means that those with a sensitive tummy will probably experience gas and bloating after consuming these foods.

We’ll walk you through the reasons these foods can cause gas and bloating so you can make an informed decision on whether to switch your cooking oil or stick with olive oil.

Do Green Olives Give you gas?

Green olives are not commonly considered to be flatulence-inducing foods, but they can give some people gas.

Olives are a source of insoluble and soluble fiber. Insoluble fiber is the type of fiber our body cannot break down. Its role is to help food move along the digestive tract, but since the body cannot process it, it can’t actually create gas.

Soluble fiber can give you gas, which is why some people might notice they’re a little gassy after consuming green olives.

Common types of green olives include:

Different olives have different nutritional breakdowns, so you might feel fine after one kind of olive but feel unsettled after consuming another. For example, Picholine olives seem to have more fiber than other kinds of green olives.

Additionally, olives are usually marinated in something or stuffed with other fruits, which can exacerbate this effect.

For some people, it’s not so much the green olives causing the gas but the other ingredients.

Some people consume olives with grapes and wine. The flatulence may not be from the wine and olives but from the fructose and fiber in the grapes. There are small amounts of fructose in wine and very little fructose in olives compared to other fruit (source: Cleveland Clinic).

Fructose is a type of sugar found in fruit. While these amounts seem negligible, some people are intolerant to fructose. For those with dietary fructose intolerance, foods containing fructose can cause gas, nausea, and bloating.

Peppers and spices can also cause digestive discomfort. Pimientos, for example, are not regarded as particularly hot peppers, but they still contain capsaicin. Capsaicin, the compound that makes peppers hot, can irritate the stomach in sensitive people, which may cause gas and bloat.

Capsaicin is also found in some spices like chili powder and cayenne, which can be used in flavored olive oil or salad dressing.

Can Black Olives Give you gas?

There are a few types of black olives, such as:

Like green olives, black olives will also contain fiber, which is mostly found in the skin and seeds of the fruit. The fat in olives can contribute to gas and bloating because fatty foods digest slowly.

Black olives also have slightly different nutritional breakdowns. When it comes to fat content, there’s not much difference per 15-gram serving, which is equivalent to two to three olives.

French Niçoise olives have the most fat with 3 grams. Kalamata olives contain 2.6 grams, and Gaeta contains 2.5 grams, so the difference is not significant.

Botija olives are the outlier, with 4.8 grams of fat in a 15-gram serving.

Research noted that meals containing fat resulted in more nausea, bloating, and a feeling of fullness (source: Advanced Biomedical Research). Olives are often served with olive oil, pizza, cheese, fish, and other foods and dishes that are high in fat.

Generally speaking, green olives seem to contain less fat, with a 15-gram serving of Manzanilla olives containing 2.5 grams of fat and 2 grams of fat in Picholine.

With all that said, fatty foods are not something to be afraid of. The fat in olives is mostly monounsaturated fat, particularly oleic acid.

Research has found that olive oil can reduce the risk of cardiovascular disease, strokes, and mortality (source: Lipids in Health and Disease).

You don’t need to avoid olives altogether, but if you feel gassy after olives, try to stick to varieties that are lower in fat and fiber.

When it comes to salted dehydrated olives, it’s easy to eat more because they’re smaller, which means you’ve consumed more fat and fiber. Plus, the high salt content of dehydrated olives makes you retain fluid, leaving you feeling bloated. Plain sun-dried olives may be less likely to cause gas.

Can Olive Oil Cause Gas or Bloating?

As mentioned earlier, fat can cause gas and bloat. Olive oil is notoriously high in fat.

Garlic contains compounds called fructans, which can cause gas (source: Current Gastroenterology Reports). Some people are intolerant to fructans, so they will be more susceptible to gas after eating foods that contain garlic.

Chili and spicy foods also trigger the release of excess stomach acid, which can result in gas, bloating, and heartburn.

Can Olives Prevent Gas Instead?

Lots of people can eat olives or olive oil and not experience gas, especially if they consume them in small amounts and stick to plain olives or unflavored olive oil.

Based on our research, olives and olive oil do not seem to prevent gas. As mentioned earlier, olives contain soluble and insoluble fiber, but these types of fiber cannot exactly cancel each other out, so the gas-causing properties of the soluble fiber will still be felt.

The fat content also seems to cause more gas than it prevents, so it’s best to stick to varieties of olives lower in fat if you’re prone to excess flatulence.

I hope this cleared up any concerns you had about olives and olive oil when it comes to gas and bloating.

Do You Grease Silicone Baking Pans? [How to]

Does Kimchi Give You Gas + Make You Fart? Here’s Why