Can You Cook Half a Frozen Pizza? [How to Split it]

A typical frozen pizza can feed quite a few people. If you only want half of a pizza, or even just a piece, do you have to cook the whole thing? You can cook half … 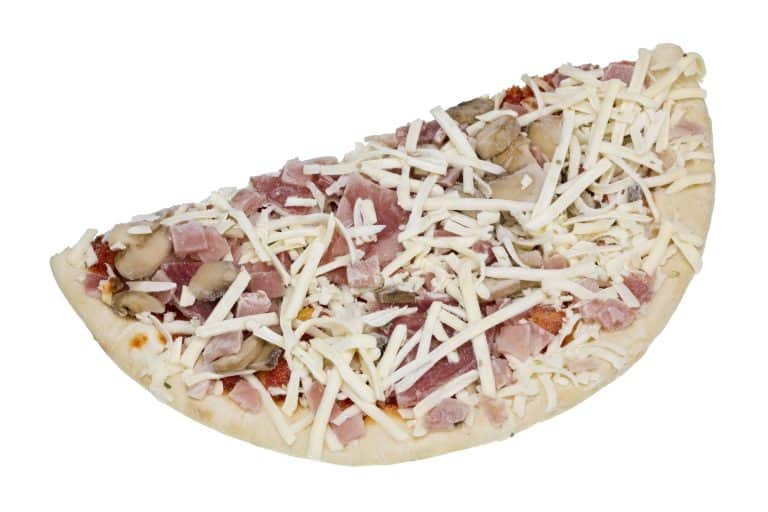 A typical frozen pizza can feed quite a few people. If you only want half of a pizza, or even just a piece, do you have to cook the whole thing?

You can cook half a frozen pizza or just a piece, but remember that the cheese and sauce might fall off the edges. You can also opt to cut the pizza before cooking, as opposed to after, to make things a little less messy.

Check out some interesting hacks and tips below!

Can You Cook Only Half a Frozen Pizza?

Yes, you can cook only half of a frozen pizza. Frozen pizza leftovers aren’t always the most flavorful, so cooking half at a time is a good way to ensure the tastiest results.

We don’t recommend cooking your pizza one piece at a time, since air exposure can cause oxidation in the pizza and change its quality (source: University of Minnesota Extension). Cooking by halves is preferable.

Also note that when you only cook a piece or half of the pizza, the cheese will probably melt and spill over the edges. We recommend placing something under the pizza to catch any melted cheese or sauce.

How Long Should You Cook Half a Frozen Pizza?

How Do You Cut or Break a Frozen Pizza?

If you aimed for a perfectly sliced pizza but ended up butchering the whole thing, you are not alone. We recommend thawing the pizza completely and placing it on a hard surface before cutting.

Most people who cut their pizza before baking use a kitchen knife. However, there’s a viral TikTok video you might have seen that shows how to cut a frozen pizza without using a knife or cutting board – or even taking it out of the thin plastic.

Another TikTok video shows a pizza that is thawed, rolled, and cut into pieces like one would cut a cinnamon bun dough. Next, it is placed on a baking tray and baked. Seems easy!

Is It Better to Cut a Frozen Pizza Before or After Cooking it?

The answer is subjective, but we’ll discuss the pros and cons of each to help you decide:

Cutting your pizza before cooking might seem like it would make your life easier, but this method will also make the cheese and sauce fall off during cooking. Cutting the pizza after cooking will prevent this from happening.

If you want to cut your pizza before cooking, one tip is to arrange the toppings on their own individual slices before you cook the pizza, leaving a pathway where you can cut the slices. This way, you no longer have to cut through the toppings (source: Reader’s Digest).

If you choose to cut the pizza after cooking, one chef recommends letting it sit for a few minutes before cutting it. This helps the flavors blend and prevents the cheese from sticking to the pizza cutter or knife. It also keeps the toppings from moving around (source: Tasting Table).

You can also try cutting it a few seconds after it comes out of the oven. Since the crust is not as hard during this time, it will be easier to cut. Experiment and see which way works best for you!

Keep in mind, cheese is likely to stick to the cutter or knife, regardless of when you cut the pizza. Have a paper towel or clean dish towel handy to clean the cutter after every slice. Many online sources recommend using a large chef’s knife that can cut through the whole diameter of the pizza.

FInally, cooling the chef’s knife before cutting the pizza will help prevent the cheese from sticking. Melted cheese will stick to a knife at room temperature (source: Food and Wine).

In the end, whether you cook your pizza one piece or one half at a time all comes down to your preferences and needs – but both are possible!

Can You Store Frozen Pizza in the Fridge? [How Long it Lasts]